São Paulo
12/02/1993
Multi-talented and versatility define Rafa Alcantara’s style. He was signed by Ligue 1 champion Paris Saint-Germain and he is an emerging figure in the Brazilian team after winning the gold medal in Rio 2016. His carioca personality makes him a vertical and skilled player. All these features define PSG's player as a good attacker from the second line, who assists and scores easily.

Rafinha Alcantara was born in Sao Paulo (Brazil), two years after his brother Thiago. He is also the son of Iomar do Nascimento Melo, better known as Mazinho, world champion in 1994 with Brazil. He grew up between Brazil and Spain and at the age of 13, he signed for FC Barcelona. With work and sacrifice, he arrived at the Barça ‘B’ team in the 2011 season, where he made his debut on January 8, 2011 against Girona in the Second Division. A week later, he would score his first professional goal against Salamanca. The following season, he made his debut with the first team in the first leg of round of 32 of Copa del Rey against Hospitalet.

Due to his high level, on June 4 he signed his renewal with Barça until 2016, but he left on loan to Celta de Vigo, a club where his father, Mazinho, had been an idol with ‘EuroCelta’. From Luis Enrique’s hand, Rafinha became an important piece of the coach’s schemes, being a starter in 32 league games, scoring 4 goals and distributing 4 assists. That same season, he won the Liga BBVA revelation player award.

The following season he returned to FC Barcelona, ​​with which he won 3 leagues, 5 Copas del Rey, 1 Champions League, 1 European Super Cup and 1 Club World Cup. Despite the serious injuries, Rafinha played well with Barça, being an important player for the team. In the 17/18 season, he left on loan for 6 months to Inter Milan, returning the following season to Barcelona. In the 19/20 season, he was again loaned to Celta, where he succeeded in saving the Galician team from relegation to the Second Division. In 2020 summer, he decided to sign for the French champion, PSG.

Unlike his brother, Rafinha decided to play for Brazil National Team, with whom he was proclaimed Olympic Champion at the 2016 Rio Games.

In March 2020, the ‘Resilience‘ documentary was released, where Rafinha shows his most human side and explains how he overcame the serious injuries he has suffered throughout his career. The documentary is on the Amazon Prime platform. ‘Resilience’, one of Rafinha’s favourite words, is explained from the player’s perspective with the support of other teammates. 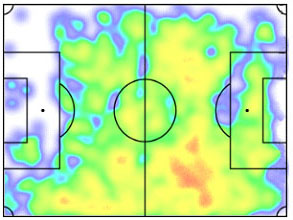